In this post we’ll dive deeper into how this framework aims to achieve the above mentioned goals. We will start by looking at Astroport’s current token emissions. We will then dive into emissions offered by other AMMs and compare them to Astroport’s. Finally, we will propose a set of criteria which can be followed by the Astroport community when deciding which pools to incentivise and how much ASTRO to give to each of them as well as how current emissions may be adjusted.

The Astroport protocol is currently emitting approximately 19 ASTRO per block across 6 pools. This equates to roughly 273,600 ASTRO or roughly $27,360 per day at current prices.

Over the last 145 days, Astroport has generated $165k in fees, or an average of $1,137 in fees per day. The ratio of incentives per trading fee is currently 0.042. Let’s compare these numbers to other AMMs’ token emissions.

Osmosis is currently in its second year of emissions where 200 million tokens will be released. Of the 200m, 45% (or 90m tokens) are reserved for liquidity mining incentives. This equates to roughly 250k OSMO or $317.5k per day at current prices. Over the last 145 days, Osmosis has generated $4.2m in fees or an average of $28,965 in fees per day. The ratio of incentives per trading fee is roughly 0.09.

The Sushiswap Masterchef contract emits 100 SUSHI per block, priced at $1.70. Post-merge Ethereum block times are roughly 12s per block, meaning that Sushiswap is emitting $1.2m in incentives per day. Sushiswap has generated $18.9m in fees over the last 145 days or roughly $130k in fees per day. This ratio of incentives per trading fee is ~0.10.

Comparing the above incentive numbers, we can see that on average Astroport is paying approximately double the incentives relative to fees generated as compared to Osmosis and Sushiswap.

In our opinion and also based on community sentiment here and here, this ratio is too high and Astroport is in fact overpaying in incentives relative to the fees it gains. 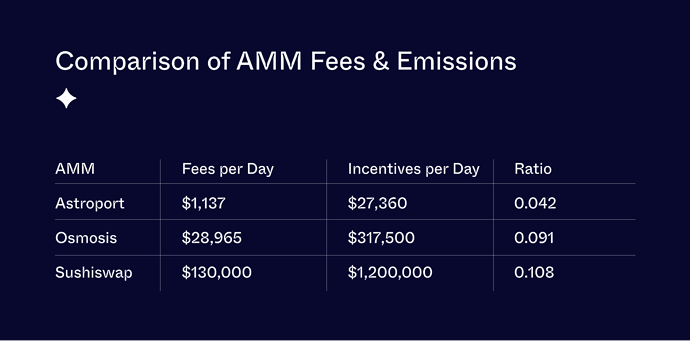 To address this issue and prevent it from happening again in the future, we would like to propose a set of criteria which can be used by the community to streamline token emission proposals. If accepted by the community through an on-chain signalling poll, existing pools which receive ASTRO as well as upcoming ones should adhere to this framework. 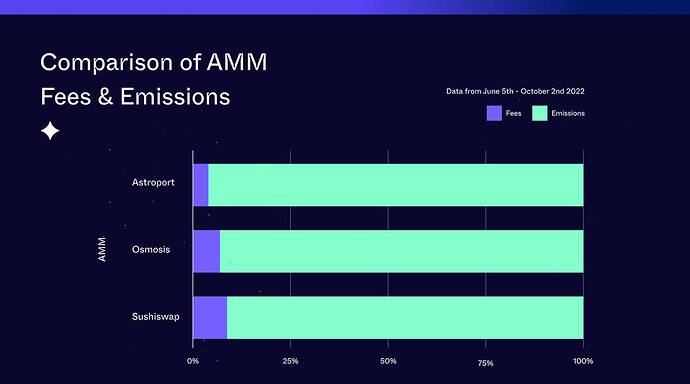 When defining the criteria below we distinguish between major and non-major assets in recognition that some assets have more strategic importance to Astroport than others. A major asset is defined as one that satisfies all of the following conditions:

Note in the case of Axelar assets we consider them equivalent to their non Axelar counterparts, e.g native USDC.

Each and every current and future ASTRO emissions proposal should meet all of the following criteria:

Besides the above criteria, we propose the following framework to periodically re-evaluate current pools that receive ASTRO emissions:

Based on this framework both ASTRO-LUNA and ASTRO-axlUSDC should receive incentives however we propose that ASTRO pairs are treated differently from other pairs with the following justification.

It is beneficial to Astroport for the ASTRO token to have deep liquidity. Firstly, this is necessary for those seeking to participate in governance to swap in and our of the ASTRO token. Secondly, an illiquid ASTRO token would result in spiky dollar values for pool incentives, making them hard to reason about for LPs. It is also not desirable or necessary to fragment liquidity by incentivising multiple ASTRO pairs.

To satisfy this we propose that the ASTRO-axlUSDC pair will be allocated ASTRO incentives, but ASTRO-LUNA will not. Additionally the amount of incentives will be set separately from this proposal and for now will remain unchanged.

This proposal seeks to reduce emissions by approximately half, bringing ASTRO emissions more in line with the capital efficiency of Osmosis and Sushiswap.

Furthermore, the current distribution of incentives has been decided by various governance proposals and is imbalanced compared to the fees generated to liquidity providers and xASTRO holders.

Proposed incentives for next 8 week period

The Astroport Incentive Framework is crucial to ensure the community has ample reserves which can be used for emissions as well as balance these emissions with fees generated by each pool. By standardising the way the community analyses emissions proposals, they can more easily make decisions on how to optimally use the ASTRO held by the DAO. We can also avoid the potentially political process of choosing which pools get incentivised and how much ASTRO each of them gets.

That will effectively reserve more tokens for future emissions as more protocols launch.

With this new change, we will see the following changes to the emissions in both alloc_points & %:

Given that the tokens will be adjusted every 8 weeks, will that be pushed by governance by any community members or shall it be initiated by the builders ?

Thank you for taking the time to research and write this thorough proposal!

I’m in favour of everything here, except for one point. I suggest that instead of readjusting incentives every eight weeks, we adjust every four weeks. Consider that Osmosis readjusts every one week. DeFi moves at a very fast pace, and a lot can happen in eight weeks. So I suggest adjusting every four weeks.

Also, I would clearly state that wash-trading is not allowed, and will be punished.

It can be initiated by anyone. One of the main reasons for this framework is to allow anyone to propose changes as long as these changes are within the framework’s bounds.

I’d argue 4 weeks is way too short. I believe communities should focus more on building and governance should be minimized as much as possible

Each and every current and future ASTRO emissions proposal should meet all of the following criteria:

I propose to make a slight adjustment to the criteria above. Given that some protocols could by in itself generate sufficient volume without dual rewards, Astroport should strive to be the deepest liquidity to capture most if not all these volumes. To reflect this, I propose that the criteria:

All of these criteria:

Reasoning for the slight change adjustment is to cover protocols who launch without their own governance token but able to produce a large amount of volume for a pair on Astroport. I am in the view that Astroport should continue to incentivise the pair to increase Astroport volume dominance on Terra. For example, should Capapult decided to emit CAPA token to CAPA-SOLID, but not to SOLID-axlUSDC LP even though it generates high amounts of fees, I am in the view that Astroport should support a pair with high volumes.

I’m thinking through your proposed amendment, Max. This would result in every single pair on Astroport getting ASTRO incentives.

I don’t believe we should be incentivizing all pools. You mention that your amendment would “increase Astroport volume dominance on Terra.” But there’s no competition. Phoenix and Terra Swap don’t have any incentives at all.

I think this amendment probably isn’t necessary. If a pool doesn’t have two major assets, or it doesn’t have one major asset and ASTRO, or if doesn’t have external incentives - then it shouldn’t get ASTRO incentives. Because really, small assets like CAPA and bLUNA really have no choice beside Astroport.

If you’re a small asset, it shouldn’t be too hard to provide external incentives. Valkyrie and Terra Poker have both done this.

Do you really think that all small assets with pools on Astroport should get ASTRO incentives?

This is a super hard topic, as it has many different facettes.

I think that a good framework makes 100% sense and Astroport overpays for liquidity right now as shown by the analysis. The ratio of incentives per trading fee of 0.1 still seems like a super low goal and not sustainable in the long term.

Any framework that can be gamed, will be gamed. The danger of wash-trading does exist for the current proposal and will be hard to detect.

My preferred way would be to just launch vxASTRO and let the LPs decide for which pools they vote for. No matter what, it should increase the demand for ASTRO. It provides a fair market based incentivation framework, where most people agree upon. I saw that some do not consider it the right time, but would like to get some insights into the reasons that are not clear to me yet.

I tend to agree vxASTRO is a preferrable solution. This framework is a temporary solution until something better comes up.

Regarding your other points:

@stefan Are you going to put the proposal to reduce emissions, or are you waiting for a non-builder community member to do it? If the latter, I’ll put it up. We’ll have to adjust the incentives reductions in the table above to account for the incentives bLUNA took from the other two LSDs.

I’ll prepare a proposal in the next 3-4 days